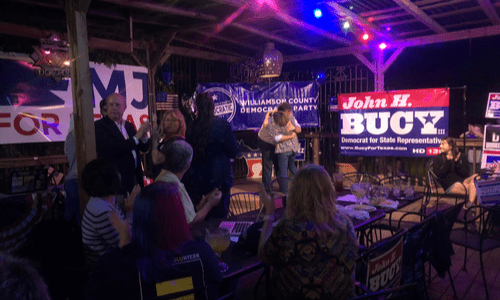 by Brandie Henderson in Elections

Williamson County Democrats celebrated big wins Tuesday night on the back of large and diverse turnout, electing multiple state representatives, justices of the peace, and appellate judges. In addition, for the first time in decades, Democrats won the majority of votes countywide in several races, specifically in the U.S. Senate race and the Congressional race. We are so grateful for all the individuals who gave time and money toward the most successful coordinated campaign we have ever run in Williamson County.

The Williamson County Democratic Party congratulates the following candidates on a successful election. We look forward to the great work you will do:

We are also grateful to our Democratic nominees who made a valiant effort. Thank you for running and giving of your time and effort toward our progressive values and causes:

Don Morehart for Judge of County Court at Law #1

Audrey Amos-McGehee for Justice of the Peace, Pct. 2

Katherine Kerr Kubatzky for Justice of the Peace, Pct. 3